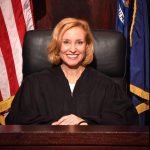 Since her appointment to the Michigan Supreme Court in 2015, Justice Joan Larsen has proven to be a true rule-of-law judge. We need more judges at every level of our nation’s judiciary who take this approach, and we are excited to hear that the President is considering her for the 6th Circuit Court:

Trump is set to announce Monday that he has picked Larsen to fill an opening on the U.S. Sixth Circuit Court of Appeals, the newspaper reported. The White House did not immediately respond to a request for confirmation.”